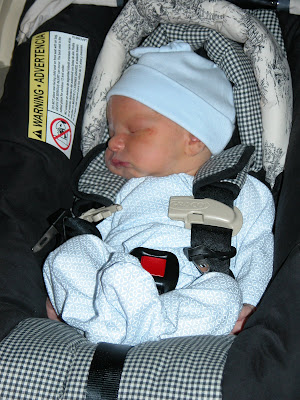 After a week in the NICU, Luke finally was feeling well enough to come home. "Well enough" is sort of an understatement based on how much he has been eating. Just 16 days ago, he was born weighing in at exactly 8 pounds. Newborns normally lose a little weight at first, but the rule of thumb is that babies should be at their birth weight within two weeks.

Well, our not-so-little boy now weighs 9 lb, 10 oz, a whopping 20% increase since his birth! Wow. The nurses at the NICU, who are normally used to dealing with preemies, were amazed at his appetite, and warned us that he would eat us out of house and home when he becomes a teenager.

We can only hope. We thank God that he is well and home.
Posted by Michael Friedl at 8:50 PM