In preparing for Christmas, Grace decided to write a biography of Santa Claus. I really liked her take on the jolly old elf. Here it is: 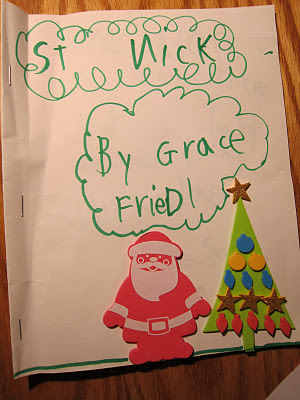 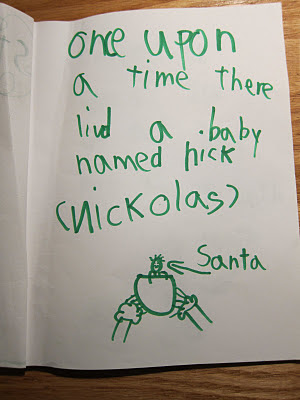 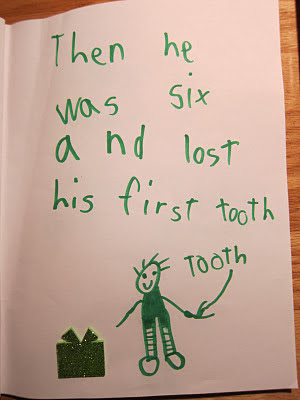 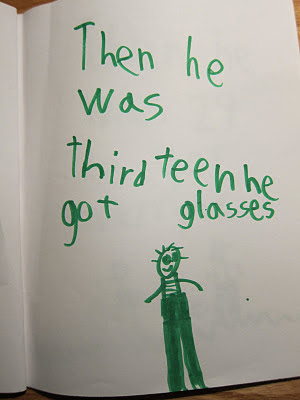 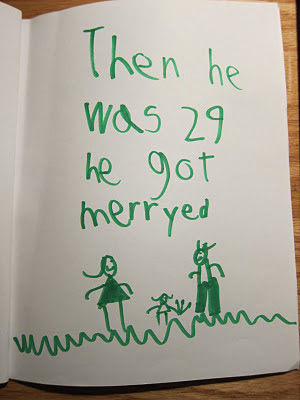 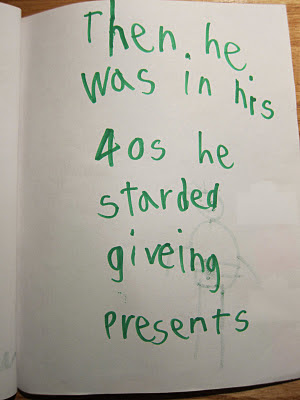 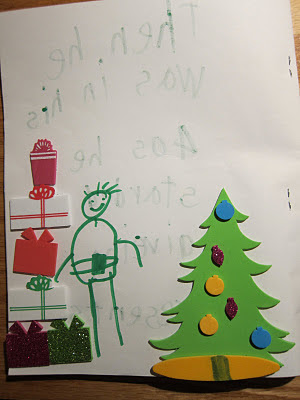 Which goes to prove it's never too late to start something new.
Ho Ho Ho Everyone!
Posted by Michael Friedl at 11:24 PM No comments:

Luke reads the How the Grinch Stole Christmas!, by Dr. Seuss. Luke is 4 years, 4 months old, and this book is nearly a fourth grade reading level. Of course, there is some memorization because he knows the story, but he is definitely not just reciting from memory. What a good boy!

Posted by Michael Friedl at 11:16 PM No comments:

Welcome to our new site!

Anyone who has visited this site recently could see how far behind we had fallen in recent months. Indeed, the newest photo on the old home page was two years old!

We've done a better job of posting photos in our Picasa albums, plus the occasional video on Youtube. These things, together with the occasional blog post, have rendered our old HTML site obsolete. So we've now made the blog the main body of the site, with links to photos and videos we add. Oh, and we've retained an archive copy of the old site. See link below right.

NOTE: I'm writing this as much to remember these events as to share them, so my apologies if I don't leave anything out.

It started out as a normal, everyday evening. I had had a late night at my desk the night before and was dragging. Chickee was out running errands and I finished putting the girls to bed. Lukey had taken a good nap at school so he was going to bed last. Lizzie offered to do Luke's bath and bedtime so I could get back to my desk. I heartily accepted her offer, gave Lukey a goodnight hug as he was headed up with his auntie.

I headed straight for the fridge in the garage. In the 10 seconds I was out there, I heard a muffled commotion through the walls. Puzzled, I hit the door and heard the screams. I immediately recognized Luke as the screamer but also heard Lizzie hollering for me as well. If I wasn't already concerned, the sight of my son's blood dripping down from the landing above was enough to make me practically levitate up the stairs to see Lizzie holding a screaming 4-year old with blood spurting from a gash on his forehead.

Turns out my little monkey was jumping on the bed. And as the song goes, he fell off and bumped his head. They must sanitize all the 'the-head-is-so-vascular-it-bleeds-like-crazy' stuff so it doesn't freak out young readers. But I suspect that the doctor tells mama that but I digress.

In any case, I had never seen that much blood. Not to get graphic, but the house looked like a crime scene. I knew that job #1 was to get the bleeding stopped. I put him on the counter with a towel under his head and held a wash cloth on the wound. I couldn't get a good look at it because it was positively gushing (read: fountain), and Lukey-boy was anything but calm. His thrashing didn't help much, poor little guy. He just wanted me to stop touching his aching noggin. The gash looked to be nearly an inch long at the top of his nose directly between his eyebrows.

Lizzie was a huge help. She immediately was on the phone to Chickee, who was now SPEEDING home. I quickly became concerned that I couldn't take a flailing, bleeding boy to the ER for stitches, so unless I could get the bleeding stopped we were going to be stuck in that bathroom. Thank goodness the floor is tile. It was already too late for our clothes. Given the situation, I asked Lizzie to call the paramedics just in case I couldn't get the bleeding stopped.

The guys were there quickly. Seems like a cast of thousands, but I hear it was only six. Chickee arrived about the same time to the chaos and still crying Luke. Grace, having seen him fall in their room, was freaking out with worry, but thankfully she stayed in her room and away from all the color.

The good news is that the bleeding was slowing down about the time the firemen arrived. They busily made sure he didn't have a concussion or other life-threatening injury, while at the same time sizing me up and checking him for unexplained bruises.

Finally the crying and thankfully, the bleeding abated.

Before heading to the ER at Mission Hospital, we thanked the fire guys and bade them good night. But not before Lukey got to sit in the fire engine. And not a little pickup or ambulance, mind you, but the real, 4-alarm monster. I'm sure our neighbors were horrified to see this hulking thing racing up to the house with the siren blaring. Seeing the fire engine was surely the best part for our injured boy. He loved when they flashed the lights on their way off.

Mission's ER was jam packed, but there is something about walking in with a blood-covered child. One lady in the waiting room looked at us and said, hopefully, "I hope that's ice cream all over his shirt." They saw us quickly.

We waited around, saw the triage nurse, then we angered the ER doc when we told him we would wait for a plastic surgeon. "I stitch these things up daily" was his comment. "Then you won't miss one more" was ours. When Dr. Nolan arrived, we all were really tired (remember the evening started with me dragging). He was comforting, commenting, "this isn't bad at all" when he looked at the open wound on Lukey's head.

They put Luke into a so-called twilight anesthesia, which was strangely uncomfortable to see, but it sure beat the protesting of the shot that got him there. We stepped out of the room while the stitching took place.

A short time and a lot of worrying later, Dr. Nolan validated our insistence. Luke's cut was deep - to the bone - and required quite a bit of internal suturing. Indeed, he took 10 stitches in three layers inside, then 9 to close the wound. He said the result would be very good. Much better than had we just had the ER guy start sewing. He might say that to everyone but it was comforting to us nonetheless.

It took seemingly forever for him to wake up from anesthesia (it was 1:00 a.m., after all, a time when this boy is typically sawing logs), but we finally piled him in the car and gingerly strapped him in.

We are eternally grateful to Lizzie, not just for her quick action after the accident, but for looking after Grace and helping her get to sleep after such drama, AND for cleaning up the bathroom after we left. You'd have never known what the place looked like just hours earlier, but it was clean and quiet at 1:30 when we returned. Chickee took to the carpets with Resolve with such gusto that we now have white spots where there were red spots. We finally dropped into bed at 2:30. This on a night I was tired to begin with.

They said the drugs were amnesiacs, and that he wouldn't remember anything....WRONG! He remembered, and seemed traumatized by everything - except the actual bonking of his head! The good news is that over the ensuing days he seemed to get past it and was his irrepressible self.

The Sunday following the Wednesday adventures, we went to the fire station to bring cookies and thank the guys for answering the call.


All in all, we hope these are the things that dominate his memories. Grace's too. Good thing Claire slept through the whole thing. Let's hope this is something he looks back on and remembers only when he reads this post and sees the pics. For the record, they don't do justice to how scary this injury was. But even as awful as it was, we thank God that it is a story we can tell without it being a major crossroads for this boy who has already been through so much.

We've already encountered so many people whose sons have similar tales. Sounds increasingly like a rite of passage. Let's hope it's an isolated occurrance.

I've previously posted some photos of Grace's art, but now's the time to share some example of Luke's work. Luke won't turn 4 until August, so bearing that in mind, I think he does quite a good job. 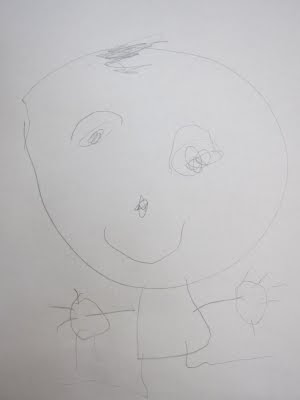 This piece is a portrait of Mommy. I thought it was quite detailed. I also was impressed & entertained that he draws hands the same way Grace does. I don't recall drawing hands that same way, nor do I recall seeing kids doing that when Chickee was teaching, but Grace & Luke both do. 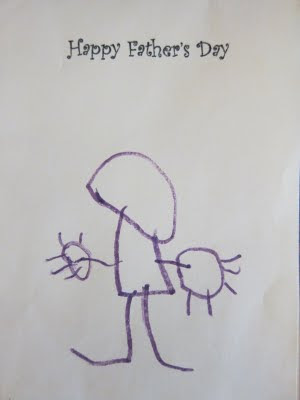 The second images are from the Father's Day card Lukey made for me at school. When his teacher asked him "where's his face?" Luke matter-of-factly replied, "he's looking the other way." 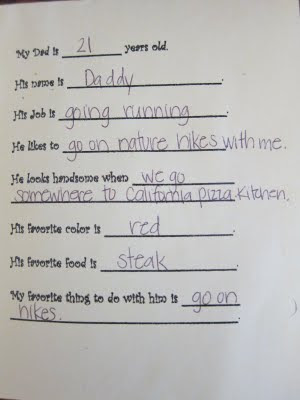 The inside of the card contains Luke's answers to the questions about me. Pretty insightful.
Posted by Michael Friedl at 10:43 PM 1 comment:

OK, so it's time for my annual blog post. Or so it seems that, despite my best intentions, I see that it has been over a year since my last post. Not that I haven't had things to say. It's just that I usually think about writing something when I'm in the car or at work. When I'm home, it's either dealing with kids, doing paperwork at my desk, or trying to unwind.

But today is a little different. I'm hanging out with Grace and the two little ones are napping. She wrote her first book yesterday, and I'm really pleased with it. It's entitled "Fairy's Life" and the electronic version is at left. Not sure when a Kindle or iPad version is coming out.

She and Mommy insist she had no help in putting it together. I quite enjoyed it and am posting it here. 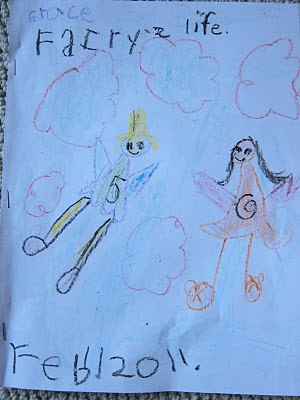 Grace's comment: The blond fairy is Grace (the "5" is the giveaway), and the dark-haired fairy is her friend Nadia. Note that the decoration is a swirl, not a 6.

Page 1: "Once two little fairies went for a fly"

Grace's comment: Because they can fly, fairies don't go for walks. 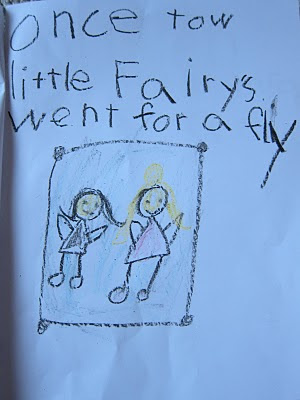 Page 2: "And then they went into a cloud"
It's hard to see, but the fairies are peeking out from the cloud. 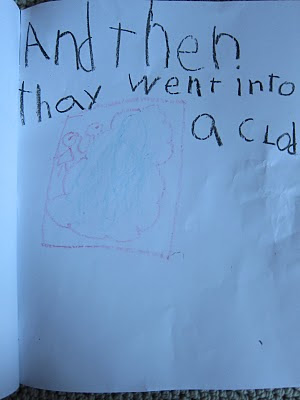 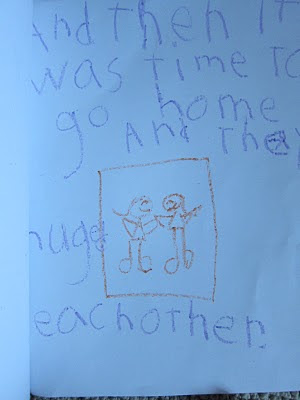 "And then it was time to go home and they hugged each other." 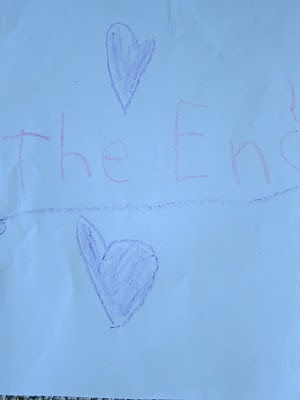