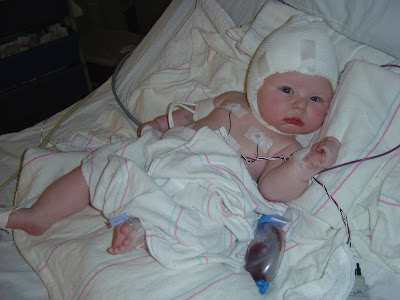 All things considered, Luke is doing really well. Poor little guy has been through an awful lot, but the docs say he is doing great. He spent a fitful night in the PICU (Pediatric Intensive Care Unit) trying to get comfortable. He was on pretty hefty pain meds but was hungry from not eating all day. His throat hurt from the breathing tube that had been inserted for the operation. They elected to give him a unit of my blood after all, but it was his constant snacking that ultimately satisfied him at around 5:00 am, when he finally conked out for a good long sleep.

We came back in around 8:00 and Luke spent a happily uneventful day eating, snoozing and watching football with me. By afternoon he woke up and gave everyone the huge smiles that he is famous for. What a lift!

We alternated between being watchfully concerned for him and for being thankful that he didn’t have the dire conditions that many of the other PICU kids were dealing with. Spend a day in a hospital intensive care unit and you will undoubtedly find yourself counting your blessings. Ours are many.

As expected, Luke’s head and face are swelling. He’s already pretty chubby, but his face seemed to be popping out of his dressings. That is expected to continue through tomorrow, after which is should improve rapidly.

By mid-afternoon, we bade farewell to the PICU team and were moved to a semi-private room on the normal pediatric floor. He’s off his IVs and one by one seems to be losing his tubes and monitors. We have really liked everyone who has been caring or him, but do feel the need to stay on top of his pain management schedule. We were able to hold him briefly, but the tubes and cords that he still has make that a little tough. We think that he should lose the rest of them tomorrow.

They gave him Tylenol with Codeine this evening, but he didn't seem nearly as comfortable as he did with the regular Tylenol. In fact, it became clear that he was fairly uncomfortable. If he could talk, we're guessing that he'd say he had a "splitting headache." They switched back to regular Baby Tylenol and he was snoozing comfortably.

The room has a “bed” for one parent to stay, and looks like Chickee drew the short straw, so she will attempt to stay with him through the night. I hope she gets some sleep.

We are VERY thankful that he is doing well, but nobody would confuse this with a day at the spa.

We love you Lukie and hope you get better very soon. We are grateful for the updates that your Daddy posts on his Blog. We can't wait to see you and hold you in our arms. Kisses and hugs from your Omi, Opi and big sister Gracie