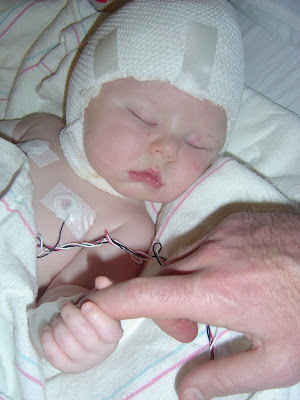 [Disclosure: This photo is from yesterday but I left the camera at the hospital so didn't have any shots from today. Besides, I like this pic because I'm in it.]
They weren't kidding when they said Luke's head would swell up. After a semi-restful night, he had a rough early morning as his noggin kept growing, swelling his eyes completely shut.As has been his pattern, once he was full and comfortable, he conked out and slept for many hours.
By mid-afternoon, he was clearly feeling better and was trying to open his eyes. Shortly thereafter, the swelling started to recede ever so slightly and Luke was able to look around. I put him into the strap on carrier and we went out exploring the floor. He immediately commenced flirting with the nurses and was all smiles anyone who came by. It was SO GREAT to see him acting like himself!
It was a lot for him to do and he got kinda pooped out afterwards. It took a little doing to calm him down and off to sleep. I hope he has a good night.
Tomorrow they will remove the bandages and the drain tube that has been hanging out of his head, and evaluate whether to send us home Monday or Tuesday. I'm looking forward to being home but hope they don't discharge him until he is feeling a LOT better.
We can't say enough about the fabulous nurses we have had. They are great at what they do and clearly love babies. Or maybe they just love our Lukey Boy. Either way, they are people we would choose for friends, and we are very fortunate to be in their care.
Posted by Michael Friedl at 10:14 PM